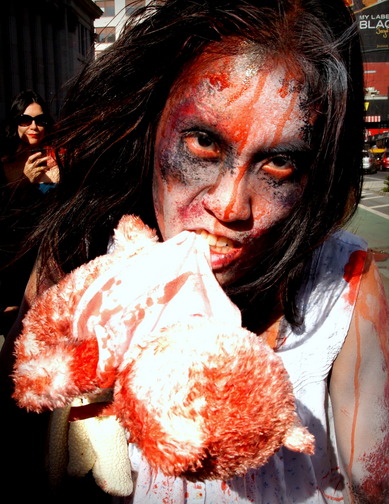 Brains, blood and gore were seen in Manhattan as Zombies invaded New York City at the 2012 Zombiecon Apocalypto Ultimo. The animated corpses joined each other at the Iguana to begin their invasion throughout the streets of NYC where no-one was safe from the walking dead. There was no where to run, no where to hide. A bloody teddy hung from the mouth of a once beautiful young woman as she and the other zombies shuffled their way underground to attack the New York Subway lines. I am glad I made it home alive despite having zombie blood on my hands.

This entry was posted in press and tagged 2012. Bookmark the permalink.